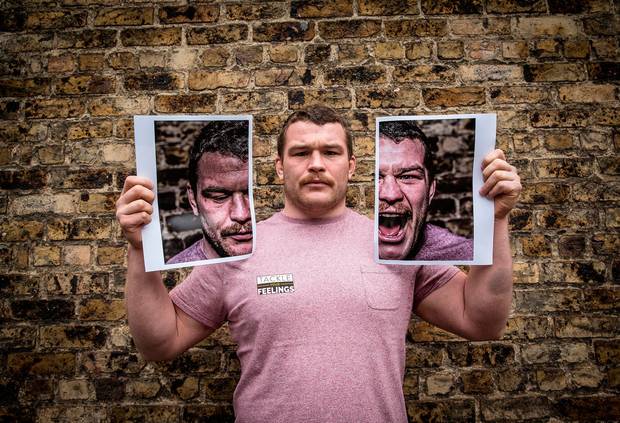 While this time of year is dominated by celebrations for the majority of us, it is easy to forget there are many who find themselves struggling against the tide of festive cheer.

Christmas time and the conclusion of yet another year can accentuate feelings of bereavement, sadness and intense reflection on the previous 12 months. It also triggers difficult memories for myself, as it was eight years ago that I had fallen to a very low ebb. It was the first time the term ‘mental health’ really struck a chord with me.

I’ve talked many times before about how tough I found missing out on the Lions tour in 2009 through suspension. It took me an incredibly long time to get over and I had to ride out some really difficult moments before getting myself back on track.

The tragic death by suicide of my former Munster team-mate Conrad O’Sullivan in 2006 is something that I also still think about a lot. Hearing the news that morning, in a dressing-room with the rest of the squad, was one of those slow-motion moments that is impossible to forget.

He was such a talented player, but more importantly a wonderful young man, and it is still so difficult to think that his death was avoidable.

These are the things that stay with you, that you never forget, and we shouldn’t allow ourselves to. Just like we should never forget to stop talking about mental health, trying to break that stigma around it, trying to normalise the conversation, trying to save lives.

For years, the macho culture in rugby ensured that vulnerability equated to weakness. Thankfully, that’s no longer universally the case, but we need to keep knocking that door down.

The national governing bodies of our sports should be commended for the player-welfare policies they are putting in place, and things have come a long way since my playing days, when a stiff upper lip felt like the only way to deal with despondency.

Rugby’s ‘Tackle Your Feelings’ campaign has done a great job in raising awareness of mental health issues. It’s so powerful for youngsters to see role models such as Jack McGrath, Hannah Tyrrell and Andrew Trimble talk about their issues.

To hear McGrath, a Lions loosehead, speak so candidly about the death of his brother by suicide, and the great distress it caused him by keeping his feelings bottled up, was nothing short of inspirational.

This is a man who epitomises toughness on a rugby field, a 120kg prop who relishes scrum time and has a huge appetite for making tackles.

Leinster’s Jack McGrath has done much for the ‘Tackle Your Feelings’ campaign by talking about his brother’s tragic death.

“I told myself, ‘Don’t cry, you need to be strong’ but last year it all came to a head.

“I had used rugby as a way of coping with it. Eventually it began to affect my playing and my relationships. I needed to talk about it.

“When I opened up it was like a gas valve had been released.”

It was incredibly courageous by McGrath to speak so honestly but we need more people to do the same because we are going through a mental health crisis in the sporting and non-sporting worlds. And we must tackle it head-on.

Ten months ago Australian rugby lost a former international lock far too soon, but what was even more tragic was that two young boys will grow up without their father and a wife will be raising her sons without her husband.

I met Dan Vickerman on a few occasions and he was an incredibly warm man. This was a guy who played 63 times for the Wallabies and in his retirement worked with the Rugby Union Players Association helping professionals make the transition into the non-rugby-playing world. To hear that he had taken his own life at 37 years of age, a man so focused on player welfare, was nothing short of heart-breaking.

I think the problem around mental health in general, whether it’s sport or normal life, is how you deal with disappointment. We are all going to encounter adversity in our lives, the most important thing is trying to deal with it in a positive way.

Of course, that’s not always easy, as things can crumble around you at any time. While it may sound trivial, from a sporting perspective, serious injuries have the potential to throw athletes into a downward spiral at breakneck speed.

You work so hard to get fit, strong and in form but one torn ligament can bring everything, not just a season but a career, crashing down with a single, unfortunate collision.

It’s 2005 and I have ruptured my cruciate in Sale in the first round of the European Cup pool stages. I’m on my own in the dressing-room – our doctor Tadhg O’Sullivan is back on duty pitch-side – listening to the home fans roar their charges on to a come-from-behind victory, but that is the least of my concerns.

I know I’ve done serious damage, and this week of all weeks. I have only started negotiating a new contract.

The inevitable torturous questions start rolling through my head: ‘Where is my future?’ ‘Where am I going to go?’ ‘Am I going to get another contract?’ ‘Is my career over?’

Catastrophic moments like that can have such a negative effect on your mentality. It’s often difficult to see any positives unless you’ve been taught how to. And unless you have that understanding, and even sometimes when you do, it can seem impossible to stop yourself from sliding into a bad place.

We know that sport and exercise can be great tools for building good mental health but at the elite level, the relentless pressure to achieve results can take its toll. Sport never felt like a profession to me, and the reality is it’s a job like few others.

It was a massive privilege to represent my province and country but the nature of the business amplifies emotions like few other jobs can. Every week is built up as a bigger game, defeat is not an option, this is the be all and end all.

The nature of the business can be very taxing on the mind, so it’s very important for players to understand perspective, which isn’t always easy when rugby sets the terms around which their lives are arranged.

The profile of the top players is such now that even on their down-time they are recognised wherever they go, and that can make it very difficult to switch off.

When you add in the round-the-clock commentary on social media, it is easy for players to quickly find themselves totally absorbed by the game. And when things aren’t going well, that’s a recipe for disaster.

Galway hurling coach Noel Larkin spoke insightfully this week of the challenges facing inter-county management teams and the difficulties that the best amateur hurlers in the county face when lining out for the Tribe.

The emphasis that is being placed on player welfare is obvious, for they know in the Galway set-up better than most how important mental health is, the tragic death of Niall Donohue in 2013 still being very much to the forefront of their minds.

“In my time we had no social media, Facebook, Twitter or Instagram. Players are subjected to faceless abuse, which we wouldn’t be used to,” Larkin said.

“I was left in no uncertain terms if I had a bad game, you’d hear it coming from the field. Now lads go home and they get abuse online just because they drove a ball wide.

“It is something that has to be looked at by Croke Park and the Government.

“I think there is room there for everyone across the board to look and see how we can make things better.”

And that’s exactly the point, for all the great work that is being done and the positive messages around mental health that are being sent out across the sporting spectrum, we cannot be caught standing still on this.

There are lives at stake.