‘Every Irish family has a mental health problem’ 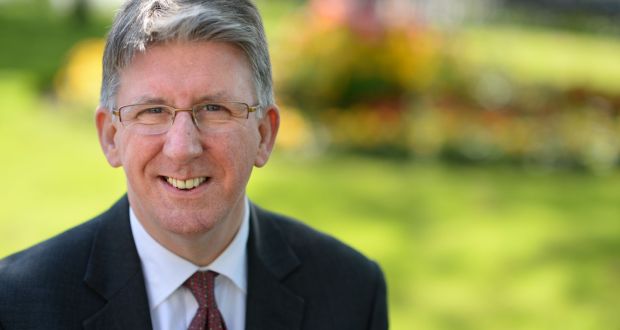 ‘Every Irish family has a mental health problem’

Jim Lucey isn’t happy with where he’s sitting. We’re in a hotel on the quays, about to start the interview. He’s perched on a sofa in the foyer, at right angles to the one I’m sitting on.

“No, I can’t sit there,” he declares. “I’m too far away from you.” He hops up to join me on my sofa, sitting down right beside me, as close as two people on a bus. Is it my imagination, or is he trying to peer over my shoulder at my screen as I’m typing? Has he noticed that I’m inching away from him, trying to regain my personal space? Why am I analysing all this?

When you’re interviewing a psychiatrist, these are the thoughts that go through your head. Lucey is the medical director of St Patrick’s University Hospital, Dublin, and a professor of clinical psychiatry at Trinity College.

He has spent three decades working with people who have mental health problems, and has now written a third book based on this experience: The Life Well Lived: Therapeutic Paths to Recovery and Wellbeing. The book focuses on a number of cases studies, which illustrate various contemporary mental health therapies.

Who does he see as the reader for his new book? “I think it’s a book that is of interest to everyone,” he says. “I would like to see this book in the current affairs section, because every family in the land has a mental health problem. Everyone has a family with a mental health difficulty, whether they know it or not.”

Lucey believes that, as a society, everyone should be talking openly about mental health. “Let’s all talk about this. Back 35 years ago, if someone had a mental health problem in Ireland, what was characteristic was that people didn’t speak about it.

“There is no health without mental health. Mental health deserves all the funding it can get; it is really about it being a human right. I think the hidden world of psychotherapy needs to be opened up. Do people know that modern therapy works? Have we told that to people?”

In his many years working in the field of mental health, Lucey has seen Irish society go through many changes, not least the recent recession. People have responded in different ways to the changes and challenges they have brought, including economic worries.

He points out that the levels of self-harm, anxiety and trauma have all increased in Irish society in recent years. “Levels of bipolar, autism, and schizophrenia have all not increased,” he says.

“We now live in a society that is very stress responsive,” he says. “It’s how we live, work and love now.”

“Anyone who tries to give you a straight answer to that question is probably simplifying it too much. We need to try and sit with the pain for a while first. We have a very high prevalence of mental health problems in young people in Ireland. It’s higher than the UK, higher than Germany. There should be more money and more funding available for research.

Is there a perception that some forms of mental health treatment, such as counselling sessions, and psychotherapy, which are often multiple sessions over time, are only affordable by those with economic means?

“Well, 45 per cent of the population have health insurance,” Lucey says. “And those people who have VHI aren’t rich; they’re nurses and teachers.”

What about the majority 55 per cent of the population who either don’t have private health insurance or who have had to let their policies lapse, due to economic circumstances?

“Then the State pays for treatment,” he says. “But why are we even asking how much is costs? We don’t ask that question of cancer treatment. Mental health is the goal that unites the whole health service.”

It’s a fact that a considerable amount of stigma still exists around mental health. Many people with mental health problems, for instance, choose not to reveal it to their employers. Why does Lucey think a stigma remains around the taking of anti-depressants, even though two years ago, data revealed that more than 500,000 people in Ireland were being prescribed either anti-anxiety or anti-depressant medication?

“Two big reasons,” he says. “Fear of addiction, and lack of trust. The reality is that there is often a lack of compassion to people with mental health problems. People need to understand medication is part of a holistic care plan. I’d like people to be encouraged to think about mindfulness; to be present in the moment and be non judgmental.”

Several times during the interview, he repeats the words, “Compassion, acceptance, kindness.” These are the qualities he would like people to show to each other, for the general benefit of all.

So what are Lucey’s top three tips for cultivating our wellbeing?

“Number one, being open to having a conversation about your wellness,” he says at once. The tragedy is that people die every day without having that conversation.

“Secondly, be forgiving of yourself and each other. We’re tormented by the need to judge ourselves and to be judgemental of others. Stop judging yourself. Forgive yourself.

“Thirdly, you can’t say to someone: ‘make yourself well’. Real engagement with someone else makes a difference, whether it is the AA, the HSE, your family or your neighbours.”

He pauses. “That’s not true. Humpty Dumpty can be put back together again. You can get better.”

The Life Well Lived: Therapeutic Paths to Recovery and Wellbeing, by Jim Lucey, is published by Transworld Ireland